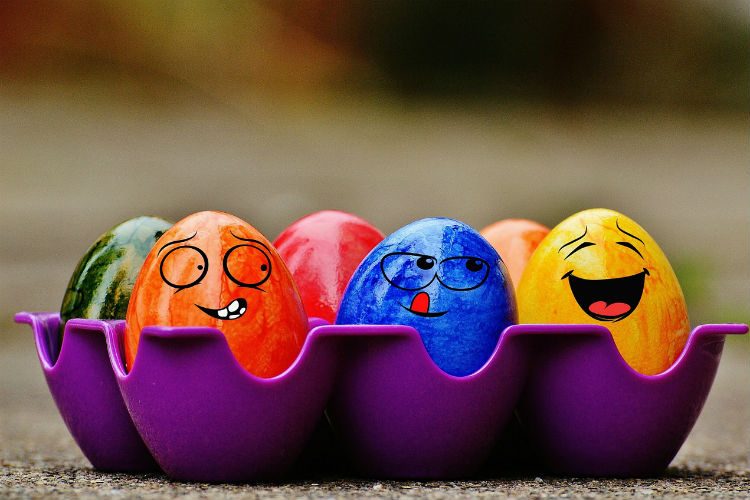 The Saturday before Easter, I might have witnessed one of the scariest things of my lives. 2000 children in a fight-to-the-death, winner-take-all, battle-royale. No this was not the WWE or the Hunger Games. This was the community Easter Egg Hunt.

We were headed out to meet friends at their community Easter egg hunt, and believe it or not, we were running late. So, we decided to go to our community Easter egg hunt instead since we were more likely to make it. As we approached the park, many cars were lined up and down the streets of this neighborhood. We finally found a spot and walked what felt like a mile to the park. The Easter Egg hunt started at 10:00AM on the dot. As we approached the host of people, we realized that there were several humongous “squares” roped off with police caution tape. On every side of the square were lines of candy-hungry parents and children, Easter baskets-in-hand, waiting for the sound of the horn to unleash their fury upon thousands of eggs laid out upon the grass. (I’m partially joking here, but at the same time, it wasn’t that far off.)

As the horn sounded, kids AND parents ran out into the grass and in about 5 seconds had every single egg picked up off the ground. What probably took several weeks of planning and preparing was finished in an instant. Now, we went to our community Easter egg hunt, but many of these are done by churches every single year. And, I’m sure that many if not most are done very differently than what we witnessed. But, it made me think about the way we do Easter egg hunts, and that they might not be the best way to show love to the community. However, there might be a better way to have Easter egg hunts. In fact, some churches and church plants might be doing them very well. However, here are a few things to consider before partaking in one.

When you tell kids to go run out and get as many eggs filled with candy you can even at the expense of another kid’s health and/or life, you are showing the bad side of man instead of a good deed for your community.

2. Beaten up kids isn’t the result your church is after.

I think that one thing you should be careful of when doing a community wide event is making sure that it’s a good experience for everyone attending. I heard one story of a kid who tripped, their eggs spilled out of their basket, and the other kids snatched them all up. The poor kid was left crying and sad. A kid who gets beaten up or their eggs stolen is not having a good time, and that isn’t what your church hopes to achieve at one of these events.

3. Being known as the Hunger Games church really isn’t a good thing.

The movie series, The Hunger Games, has done incredibly well in the box office, but I’m not so sure that you want all your neighbors thinking of you as the Hunger Games church. As good as those movies were, I don’t think it presents the Games as something we should achieve but a society gone wrong.

4. Instead of one massive egg hunt, consider doing a number of smaller neighborhood Easter egg hunts.

Maybe the geographic area is several of the streets in a couple of blocks. A community group, Sunday school class, or life group could sponsor it, and it could be a great way to meet your neighbors and experience real community.

5. Can you possibly make a meaningful connection in five seconds?

One of the downsides of having a massive number of kids participate in an Easter egg hunt is that a ton of people are in and out in a very short amount of time with no connection with someone from your church. It becomes more about the numbers and less about real connection, friendships, and being a blessing for your community.

I don’t mean to be a fuddy duddy and ruin anyone’s Easter traditions, but I hope that we can all do a better job of connecting with our community. There’s got to be a better way, and we need to remember to connect the WHY with the WHAT. It’s awesome to want to do something nice for your community, but ask the hard question to figure out if it really does connect with people in your community.