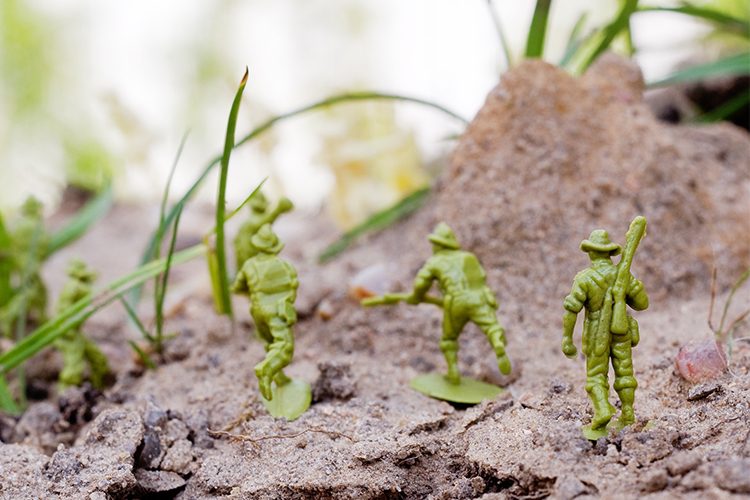 When We Fight the Wrong Enemy

Think of a trench with men lining one side and guns pointed down range towards a real and present enemy. The battle rages, and the men fight tooth and nail until they become tired. The battle becomes monotonous, and the men go into a trance. Before the men realize what’s happening, they find themselves shooting at their brothers in the trenches.

I was talking to another pastor who told me this analogy that he thinks of every time he hears Ephesians 6 and the phrase “For we do not wrestle against flesh and blood.” We both started sharing personal stories of how we have been caught up of friendly fire in the past. Sometimes, we were the ones shooting and other times we were the ones being shot.

It is easy to do. We are all sinners and we are constantly being conformed into the image of Christ. We forget the Gospel. We forget our real and present enemy. And, we forget who we are fighting for.

We have to stop fighting each other and look downrange to the real enemy.

1. Know Who is in the Foxhole With You

Not everyone who names the name of Christ is fighting for the same side. It becomes cliche to say, “Christians are the only ones who shoot their wounded.” This is a great analogy but can be taken out of context very easily. Someone may name Christ but believe in a different Jesus than you. They are not believing a different interpretation of Jesus. They are not believing in Jesus at all. We must fight the war for truth to help those men and women caught in the enemy’s prison to point them to the real Jesus.

However, small differences in secondary and tertiary theological points shouldn’t be cause for firing at each other. Too many churches and pastors compete with one another for the same churched people and bragging rights to bigger and better audiences to hear themselves speak. Find ways to pray for other pastors and churches in your area and do good to them.

2. Stop Assuming Motives From Others

One of the best tactics the enemy uses to turn the fight on each other is to influence the private mind. When another brother behaves in a way that is unexpected, it may be natural to assume a false motive on him. Those assumed motives can take lives of their own and create false conspiracies in one’s mind that may blow up an easily fixed problem into something that is out of proportion.

3. Don’t Let Your Mini Battle Distract You From the Real Ones

We’ve read the end of the book and know that the enemy loses. So, the only option he has in fighting is to distract us from the battle at hand. He’s very good at it too. How many church splits have happened because people disagreed with the color of the carpet? How many friends never talk to each other again over hurt feelings and miscommunications? Way too many to count.

We need to remember where the heat of the battle is and focus our time and attention there.